The Finnish circular economy model will be developed into an export product; the Kemi-Tornio industrial concentration provides an international example 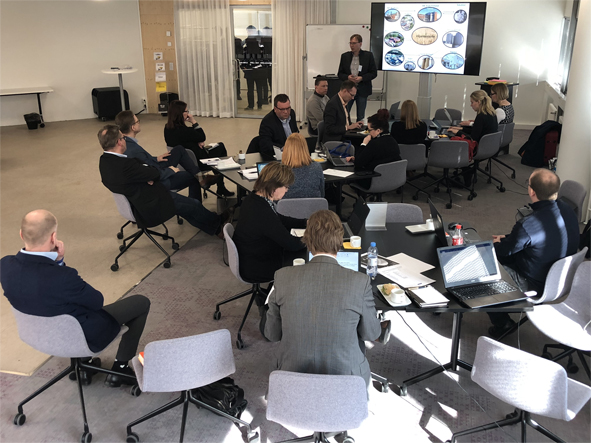 The Circular Economy Centre, coordinated by Kemi Digipolis, launched the creation of a nationwide network of eco-industrial parks at a workshop hosted by the Finnish Innovation Fund Sitra in Helsinki. The workshop attracted the top Finnish experts in the field.

- In the coming year, around 10 workshops will be organised throughout Finland. The aim is to utilise the successful industrial symbiosis model of the Kemi-Tornio economic region nationwide, as well as to develop the Finnish circular economy model into an international export product, says Kari Poikela, leader of the Circular Economy Centre.

Mika Laine, the entrepreneur behind the Envor Group in Forssa, emphasised that the journey to become an international export product is long and requires focusing on the essential: industrial circular economy, to be taken seriously, is not possible in every municipality or town.

- It should be noted that an eco-industrial parks cannot be created everywhere. Eco-industrial parks arise either around a large industrial operator or around a residential concentration. It should also be remembered that circular economy is a broad concept where industry-related material economy is only one part.
Material economy always means operations of large masses, which requires large investments: “Efficiency and business perspective cannot exist without large masses,” said Laine.

Linda Fröberg-Niemi, PhD in Chemistry and Business Development Manager at Turku Science Park, emphasised the business perspective. Along with Mika Laine, Linda Fröberg-Niemi added her viewpoint into the discussion. Fröberg-Niemi encouraged eco-industrial parks and industry to collaborate with local universities and the companies sprouting from them. Turku, with its two universities, has very good experience on this.

“I want to change the view that the researcher will not succeed as an entrepreneur. The real situation is often completely opposite, because many similar things are required in entrepreneurship and in the research. Researchers and entrepreneurs must always raise funding for their operations, which, of course, requires substance knowledge. In addition, both entrepreneurship and research require the drive to achieve results. For example, at the Smart Chemistry Park, which is a circular and bio economy innovation platform operated by Turku Science Park, there is a group of expert companies set up by people with academic training in chemistry that bring solutions to the realisation of the bio and circular economy,” Fröberg-Niemi stated.

Kemi-Tornio is a good practice example and a pioneer

The Kemi-Tornio economic region was not selected as a model area for eco-industrial parks by coincidence, as Sea Lapland has an internationally significant concentrationof large-scale industries in an area of only 25 kilometres.

Last year, under Sitra's leadership, Finland was the first country in the world to prepare a national roadmap for the circular economy action programme. The aim of the programme was to create a common vision for society to promote the circular economy and to define the most effective means for achieving it.
Sitra selected the industrial circular economy innovation platform led by Kemi Digipolis as one of the roadmap’s key projects.

The founders and core actors of the Circular and Bio Economy Centre are Digipolis, the City of Kemi and Lapland University of Applied Sciences.