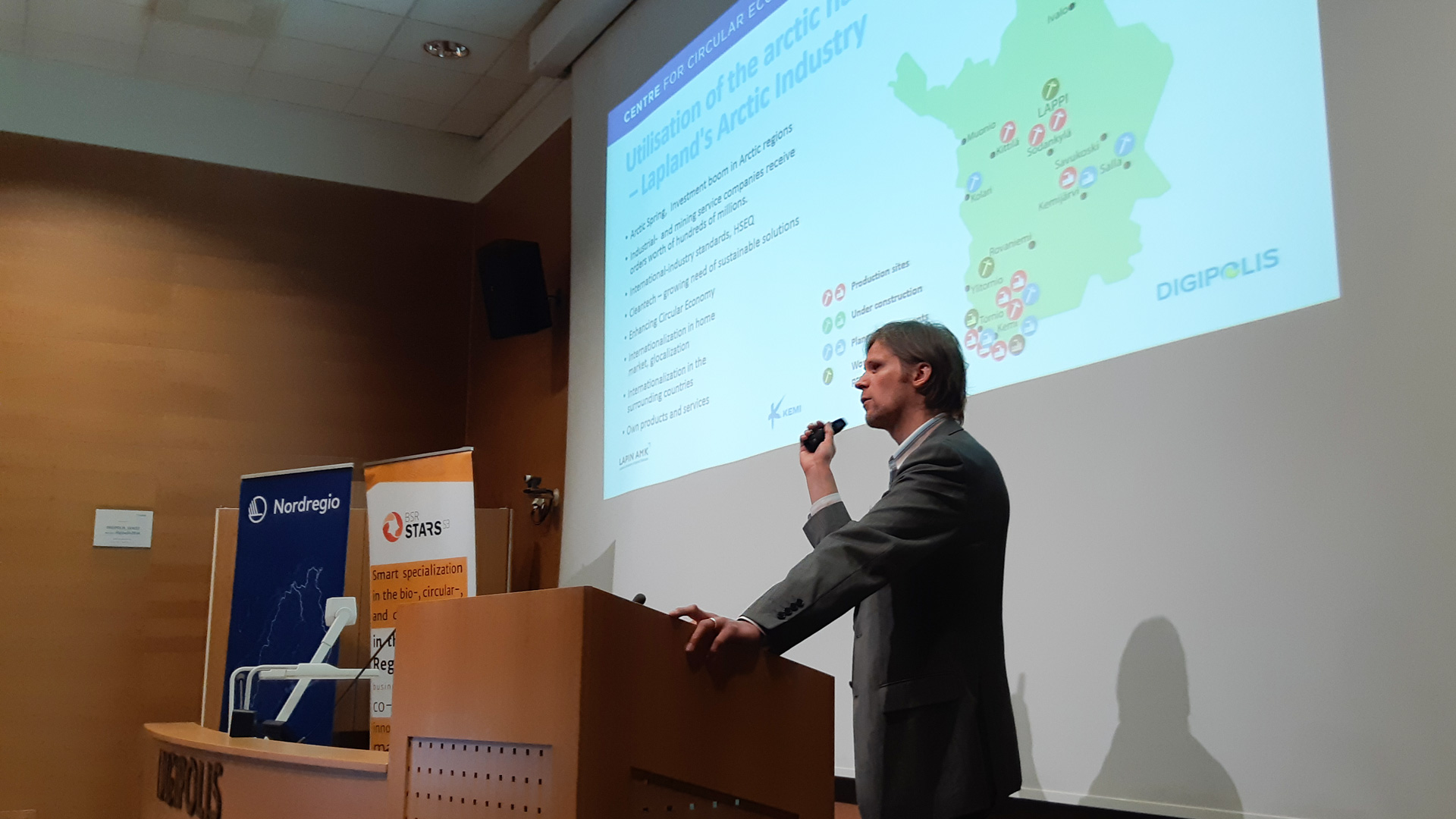 A Study Tour for the BSR Stars S3 project was hosted on June 14th at the Digipolis in Kemi. The Study Tour is visiting this week in Kemi and Rovaniemi to introduce the Arctic way of promoting circular economy, bioeconomy, and smart specialisation.

The Study Tour presents the key actors of Lapland’s Innovation System and opens up opportunities for the participants for concrete cooperation with Lapland. The company cases, like Tapojärvi Oy, to be presented at the Study Tour cover especially industrial circular economy and Arctic bioeconomy, that play an important role in the implementation of the smart specialization program in Finnish Lapland.

The Study Tour is hosted by Nordregio, The Nordic Council of Ministers, and the Swedish Agency for Economic and Regional Growth together with the Regional Council of Lapland. More than 30 participants from the Nordic and Baltic regions, as well as other areas take part in the Study Tour to explore the cooperation opportunities with Lapland. The participants have diverse backgrounds ranging from Nordic institutions and national research institutes to municipalities. Many are experts in clusters, bioeconomy or circular economy.

In order to spread the Kemi-Tornio region’s industrial circular economy operating models throughout Finland, the Finnish Innovation Fund Sitra wants to cooperate with experts and training providers in the region. Funding by Sitra, and cooperation with the City of Kemi, will promote industrial circular economy training and expertise nationwide. The founders and core actors of the Centre For Circular Economy, established in Kemi, are Digipolis, the City of Kemi and Lapland University of Applied Sciences.

Kari Poikela, director of Centre for Circular Economy tells that the question in everyone’s mind is, how the circular economy works in the Kemi-Tornio region; Who are the key players, when and how are the jobs, Euros and Kronas generated; overall, what is their key to success.

Per-Erik Sørås, Senior Advisor at the Trøndelag Fylkeskommune from Norway, represents the Trøndelag region with oil and gas industries. “Developing circular economy has been selected as one of the higher priorities for our region. We have realized this being one of the important ways to mitigate the climate and gas problems; to use less resources and to produce more. Since the circular economy has not been in our focus in the past, we need to leapfrog and learn fast, and coming here is one way to do that”, he states.

Anders Olsson, Regional Development Director from Värmland region in Sweden, found many similarities between his home region and the Kemi-Tornio region, and is therefore expecting valuable key takeaways from the event. Both of the aforementioned regions have strong pulp and paper industry, as well as metal industry, and companies such as Stora Enso and Outokumpu are located at both of these areas.

“I was very intrigued about the flow chart, that showed the streams between different companies that you have,” explains Mr. Olsson, for understanding of the local cluster network. Although the first look of the two regions seem similar, Mr. Olsson found differences in how the industrial ecosystems are organized. Kemin Digipolis Oy leading the Arctic Industry and Circular Economy Cluster plays the key role in the Kemi-Tornio region, and that might underlie some answers to the success of circular economy at the region.

Participants from Nordic and Baltic countries represent specialists in the fields of circular economy, bio economy and clusters.

BSR Stars S3
BSR Stars S3 is an international project that seeks to enhance sustainable growth opportunities in the Baltic Sea Region, focusing on the fields of bio-, circular and digital economy. BSR Stars S3 stimulates transnational and cross-sectoral partnerships, develops integrated innovation support infrastructures and innovation management tools, and increases the capacity of innovation actors to utilize smart specialization strategies (S3). It is part of the EU Strategy for the Baltic Sea Region under the BSR Stars flagship, and has received funding from the Interreg BSR Programme. More information: http://www.bsr-stars.eu/bsr-stars-s3/