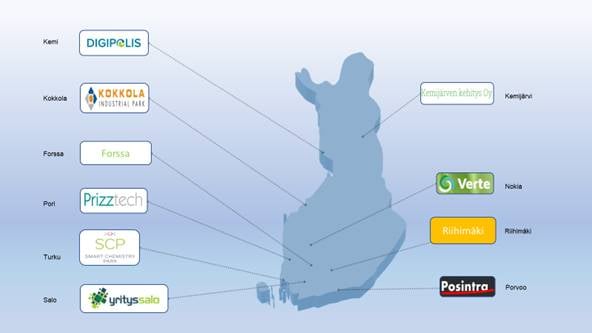 The founders and core actors of the Circular and Bioeconomy Centre are Digipolis, the City of Kemi and Lapland University of Applied Sciences. The network encompasses the Circular Economy Village of the City of Riihimäki and Fortum Oy, Smart Chemistry Park in Turku, Kokkola Industrial Park, the Eco3 bio- and circular economy business park run by the City of Nokia and Verte Oy, the development company Posintra, Neste’s Kilpilahti area in Porvoo, Prizztech and the Harjavalta area in Pori, the Metsäjaanu industrial area in Salo, Kemijärven Kehitys Oy, the Patokangas bioindustry park, the City of Forssa and Envi Grow Park.

The Patokangas industrial area in Kemijärvi has long industrial traditions. Stora-Enso’s pulp mill, which was closed in 2008, was located in the area, which was later reconstructed in stages. The area now has Keitele Group’s sawmill and glued laminated timber factory. A wood pellet plant will be built in the summer, which will utilise the secondary flows from the glued laminated timber factory. In addition, the area has a refurbished electric railway line and a new timber terminal, from which approximately one million cubic metre of wood a year is delivered for processing elsewhere. Keitele uses approximately 700,000 cubic metres of wood a year, of which some 50% is processed for making glued laminated timber.

Plans for building a new bio-product plant in the area were already introduced in 2014, and the project is now close to completion. An investment decision, a water and environmental permit and a start-up permit are expected soon. This means that the construction work should begin in the autumn of 2018. After the introduction of the bio-product plant, the area will receive approximately 3.5 million cubic metres of wood flows of different types each year. In addition, plants operating in the area will gain synergy benefits from each other. Secondary flows, energy flows and end products will allow the establishment of a range of new industry enterprises locally.

In the circular economy village, community waste circulates through an automatic sorting plant, or eco-refinery, in which biowaste, plastic, metal and recycled fuel suitable for industrial use are separated. The remaining waste, or reject, is not suitable for recycling, but is used for electricity and heat production at our waste incineration plants in Riihimäki. The recycling of plastic waste for reuse takes place in a plastics refinery, which is part of Fortum’s Circular Economy Village complex and produces high-quality recycled Fortum Circo® raw material for the needs of industry.

Riihimäki Circular Economy Village also has access to zoned land areas suitable for recycling operations. The City of Riihimäki is currently looking for companies engaged in the further processing of fractions or utilising the waste heat generated by waste incineration and interested in running a business in the area. The circular economy cluster in Riihimäki also has many other companies, such as Suomen Kelapalautus Oy, which has created a cable reel recycling system, and Green Disposal Oy, which specialises in SER recycling.

Kilpilahti, Porvoo, has the largest cluster of oil refining and petrochemistry in the Nordic countries. The area has approximately 3,500 jobs. The companies operating there provide a continuous production chain from crude oil to plastic products. Neste also manufactures renewable fuels.

Together with local companies, the City of Porvoo and the development company Posintra are building a new future for Kilpilahti. Development efforts are partly based on the companies’ local operations, while seeking innovative ideas. Kilpilahti has excellent opportunities to develop into an important bio- and circular economy cluster.

Together, the operators involved have defined a common development vision for the area, entitled ”Kilpilahti, world-class industrial circular economy cluster - sustainable, intelligent renewal”. The City of Porvoo is currently zoning more business land for the area.

The Satakunta region has an important cluster of Finnish industrial companies. The Industrial Chain extending from the Port of Pori to Huittinen includes 800 companies, with a turnover of more than EUR 4 billion and over 10,000 industrial jobs. Freight volumes in the Port of Pori, which serves the area, are valued at approximately EUR 5 million a year. Companies in the area specialise in the metal processing, chemical, engineering workshop, forestry, automation and bio- and food industry. Examples of energy production include an LNG terminal and wind power plants. The circular economy within the industrial chain is highly sophisticated; high volumes make the area an ideal development platform for the circular economy and industrial symbioses. The area’s unique feature is its colour metal cluster, which produces cobalt, gold, silver, copper and nickel metals and chemicals.

ECO3, an innovative industrial-scale bio- and circular economy business area, is being established in the Kolmenkulma area of Nokia, which is known as the growth corridor of Finland.

The current size of the area is around 90 hectares. The bio- and circular economy business areas included in new zoning scheme cover an area of approximately 50 hectares. As a result of the joint concept development efforts launched by existing and future companies and other operators, ECO3 is already becoming a business environment of international interest.

Around EUR 60 million of new, industrial-scale anchor company investments in the bio- and circular economy (winter 2018) have already decided on for the area.

Kokkola Industrial Park (KIP) is the most important inorganic chemical industry cluster in Northern Europe. It houses several leading chemical and metal industry companies, and Finland’s third largest multi-purpose port. KIP’s chemical cluster is an excellent example of the circular economy in action. It offers a wealth of synergy benefits and an effective infrastructure, which also provide interesting opportunities for new technologies and products derived from the combination of chemistry and the bio-economy.

Strong synergies between companies have emerged at KIP over the decades, covering different levels such as the utilisation of secondary flows from the process industry, centralised service production and the joint development of operating cultures, particularly around EHSQ functions. The strengths of the regional infrastructure lie in its secure energy supply and near self-sufficiency in other commodities, as well as the port operations and other key logistics services integrated with the area.
KIP currently has 15 industrial companies, and 55 service companies that provide the businesses operating in the area with access to commodity and sewer networks, pipe racks, railway lines and specialist and security services. The largest companies in the area are: Boliden Kokkola Oy, CABB Oy, Freeport Cobalt Oy, Kokkola Energy Ltd, Port of Kokkola, Neste, Oy Woikoski Ab, TETRA Chemicals Europe Oy and Yara Suomi Oy.

Chemical industry companies have been operating in KIP since the 1940s and port operations since 1825. Industrial symbioses between the various operators have developed into very strong, close ties since the very beginning.

Companies have pursued extensive cooperation in the 2000s in order to develop the area. Many types of secondary flows have been identified and utilised, and operations have been boosted, in the spirit of the circular economy. An important step in developing the area was the foundation of the Kokkola Industrial Park Association (KIP ry) in 2006. KIP ry has participated in several development projects, including the Biovalley cluster of expertise covering Central Ostrobothnia. KIP is a member of the European Chemical Site Platform (ECSPP). In 2018, it was invited to a project entitled “Distributing the industrial symbiosis expertise and operation model in Finland”.

Metsäjaanu is an evolving business area with excellent transport connections: the centre of Salo and the Turku-Helsinki motorway can be reached in slightly over five minutes. The area lies close to main road no. 52, which provides Metsäjaanu with smooth access towards Hanko in the south. The 100-hectare area, including the Korvenmäki area of Lounais-Suomen Jätehuolto, forms a cluster consisting of 10 companies and almost 100 employees.

Metsäjaanu will become a specialised business environment for environmental, recycling and energy production businesses, and the companies using their services. The area is particularly suitable for operations producing high volumes of recyclable secondary flows. A new eco power plant will be located in Korvenmäki, to serve as the driver for developing the area. The area is also suitable for operations that cause an environmental nuisance.

Since 2008, the Forssa region’s business strategy has been based on an environmentally friendly approach supporting sustainable development, or smart green thinking. In the near future, we want our region to produce an even broader range of ecological products and services while its customers, companies, communities and decision-makers tackle the environmental impacts of their operations.

Our eco-industrial park recycles materials, energy, expertise and knowledge. The Envitech area in Ratasmäki and Kiimassuo has more than 200 hectares of land for environmentally friendly, sustainably developing businesses. 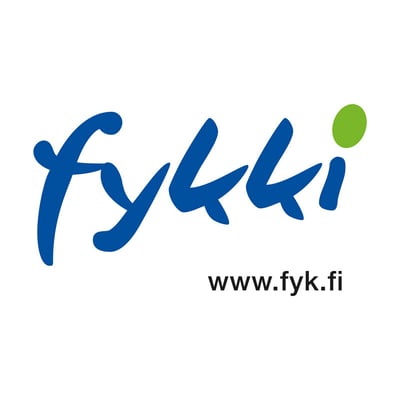